The Art in the Forest

I woke up Monday morning to find a bit of a debate on my Twitter feed over assessments of my ability (or lack thereof) to pontificate on trends in the energy sector. Specifically, Art Berman — @aeberman12 — noted:

“I told Peter last time we met that I believed he should stick to what he knew–demographics & geopolitics. His view of shale plays & US energy independence/dominance is that of most oil analysts with no experience in O&G business–partly right & dangerously wrong.”

Let me start by saying that while those sound like fightin’ words, Twitter has a way of making us all sound like hot-headed jerks. I’ve met Art a handful of times and I know he is one ultra-polite cat. Art was just pointing out in under 280 characters that he’s a specialist in his field and I am… not.

He’s correct about that, but he is not correct about the rest. I am not a demographics expert, and I’d argue geopolitics is too multi-tentacled of a beast for anyone to truly command.

I also don’t know more about the Chinese DF-26D ballistic missile than the folks in the U.S. Navy who worry about it striking an American carrier, so I’m an avid reader of Aviation Week. Nor do I know the minutiae of demographic trends, so I follow Vikram Mansharamani. Nor can I keep up with the wild insanity of European security policy, so I rely upon the insights of Francois Heisbourg and Ivo Daalder. Nor do have the time, inclination and focus to follow the ins and outs of Chinese finance, so I keep tabs on what Michael Pettis is doing. Rose Gottemoeller for nuclear policy. Liam Denning for global energy markets. Borzou Daragahi for the Middle East. Milo Hamilton for rice. Max Roser for delightfully unexpected data visualizations. Jake Bramante for great backpacking analysis.

I’m not a specialist in any of these things. I mean, come on, I’m from Iowa. How sophisticated do you think I can be?

All these folks I follow are the true experts. The specialists who know all the details and relationships of their respective niches. I think of them as tree people.

I’m more of a forest guy.

Since Art started this little journey, I’ll use him as an example.

Art’s specialty is petroleum economics, in particular he analyzes the relationship among a firm’s finances, its reserves, its production rates, and ultimately its profitability. The bread and butter of his consulting business is to help folks identify which firms will and will not prove financially viable over various time horizons. (Apologies to Art if I didn’t get that quite right. After all, I’m not a specialist.)

If you are interested in the U.S. shale industry from an investment or profitability standpoint, and for some reason you have not spoken to Art, you are doing yourself a disservice. He’s clearly the headliner for his business niche.

But Art is probably not who you would go to discuss the newest technologies in the shale sector, and why would you? He’s not a specialist in that very specific subfield. For that the University of Texas’ Bureau of Economic Geology (BEG) is a better match. I watch what both are doing.

I follow Art both for a reality check on how much the shale sector can grow with current models, as well as to understand what sort of firms might be able to enter the shale patch to displace players less stable. Its about figuring out the future corporate makeup of the shale patch. Without Art I would have never known to even look at the shale sliver of bond markets.

Conversely, I follow the BEG to get an idea of what new techniques might work at what price points in what petroleum basins so that I can grope towards an understanding of what the operational geometry of the shale patch might look like in three to five years. Without the BEG I wouldn’t have even heard of multilateral drilling until it became widespread and could have never projected forward.

I don’t pretend to know more about the specialties of Art or the BEG because I do not, and I never will. But I use the work of both as well as Vikram and Ivo and Rose and Borzou and Milo and many, many others to game out the bigger picture over many sectors on multiple continents over a (much) longer time horizon.

I look at the world. It is a very big forest. It requires me being as well-rounded as possible. I’m certainly not the smartest person on topics oil when in a room of oil operators, but I bet I know more about agriculture. And when I’m in a room of farmers I bet I know more about manufacturing. It isn’t about being the smartest person in the room on any given topic. It’s about being able to draw connections among all topics.

So, with that in the proverbial back pocket, let’s talk about shale today.

The biggest point of friction between Art and myself is over output horizons.

Take a look at this screen grab. This is all data from the U.S. Department of Energy’s Energy Information Agency–EIA is by far the best piece of the U.S. government infrastructure for collecting and understanding the details of any energy question. The dotted lines are the EIA’s annual estimates for what shale output will be in the future. In the legend you can see what year EIA made each estimate. 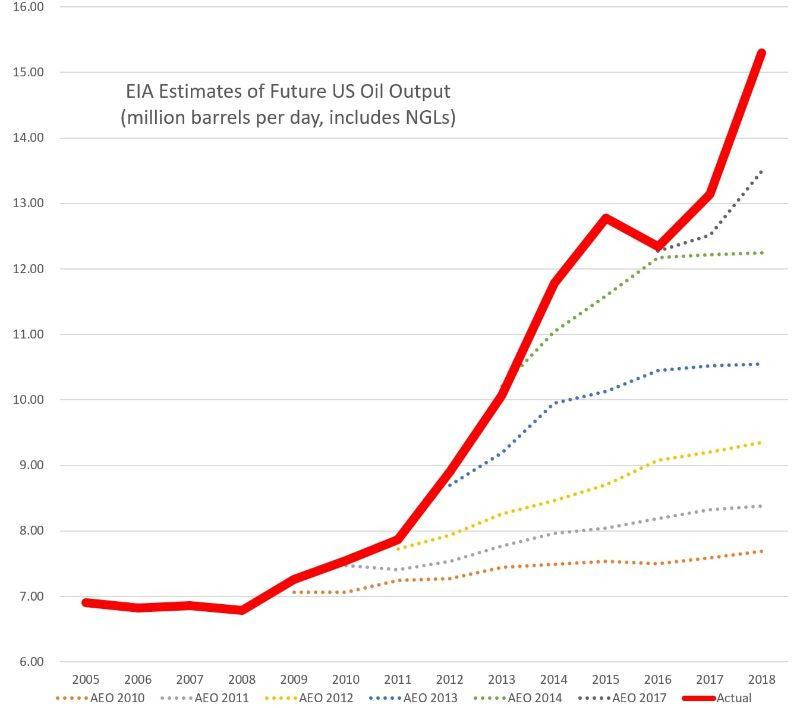 The solid line at the top is actual output.

Notice that the EIA has never gotten it right. They’ve always under guessed. That’s because they cannot factor in technology that has not yet been invented. There is oil in shale formations, but the EIA–and I daresay, Art–didn’t know how to get it out of the ground. Toss in the profit motive, and BAM! People found a way. Shale boom.

The problem is predicting the impact of new technology. Whenever something comes out that no one has seen before, it is no simple task to predict what it will do once it is applied en masse. As recently as five years ago there were hundreds of producers in the shale space. Each was developing new techs. Even if 90% of those innovations proved unworkable, the rest eventually caught on and transformed what was possible. Things like micro seismic, multilateral drilling, better data and water management are not simply being continually refined and improved but combined into best-practices systems that have steadily–meteorically–increased American oil output to generate that thick line.

That unpredictability is step 1.

Art is absolutely correct: Many of these small companies have not been profitable. Many hemorrhage money. Yet that hasn’t mattered because international instability has funneled ridonkulous volumes of scared, stupid money into the United States. That money seeks investment products that have a hard asset and a revenue stream. A net loss is not considered overly problematic since if the money stayed at home the fear is it would all be lost. Shale bonds, as imperfect as they are, fit the bill. Add in the general swollen nature of the American financial community in the aftermath of the subprime crisis and the availability of financing hasn’t often been a limiting factor. Art doesn’t have to be wrong for the overall sector to grow.

Where I get interested is that the very financial weakness of these barely-profitable or unprofitable firms provides openings for stronger firms.

Enter the super majors. For the first decade of the shale revolution, the supers barely touched the sector at all. Their concern — like Art’s — is profitability. They saw an experimental industry with razor-thin to nonexistent profit margins and they stayed away.

But all those new techs are now combining into a best practices suite, and whenever a piece of the oil patch is determined not by chutzpah and innovation and financial…creativity but instead by brute force and iron-clad internal finance and technical acumen, bet on the supers every time. The supers are now sweeping into the shale patch and buying up financially-stressed independent operators by the dozen.

In a young industry ingenuity is everything. In a mature industry scale is more important. The independents have ingenuity. Ingenuity has made shale ever more efficient, dropping overall production costs from in excess of $100 a barrel to something under $40. But the industry is now maturing, and the supers have scale. The torch is passing.

ExxonMobil has rather boldly opined that some of their newer, larger production schemes for the Permian Basin will be have costs as low as $15 a barrel.

As that’s a figure cheaper than oil production costs in Saudi Arabia, that sort of claim grabs my attention even though we know that the Exxon plan is not an apples-for-apples comparison. Exxon didn’t note whether the $15 figure includes exploration or tax or transport costs or is limited to production and lifting expenses. Much more importantly, the supers operate in a starkly different manner than the smaller mom & pop firms that have dominated the shale sector until now:

In part the supers have the advantage of scale (internally-sourced finance, better data crunching, the best engineers in the world, etc.). A bigger piece of it, however, is the supers won’t drill a well they don’t think will be profitable. Most smaller players — in part because they are experimenting — will drill every possible spot on their leases. That’s what happens when cash-flow is king. The supers think on a longer time horizon and so tend to only drill the really good spots. That generates more output per unit of input, even if it leaves a bunch of crude in the ground. It might generate less production, but it is better optimized. Profitability looks better. (I can hear Art nodding approvingly.)

This evolution in players probably means that the pace of output increases will slow but considering 2018 output gains were the largest single-year gains ever, that really isn’t saying all that much.

Which brings us to point three. Even assuming the pace of increase in 2019 is half that of 2018, the United States still becomes a net crude exporter at the end of this calendar year. Yes, that’s a notable milestone, but it in no way signals the end of the shale story. Even assuming future annual increases are only one-third that of what they were in 2018, the American oil patch will add a new Saudi Arabia of output within a decade.

Now there are a hundred shades of subtlety within that statement, and a thousand events that will unfold before that happens, so I’d not get too enthusiastic with the chick-counting. But most of the things that will go wrong will happen well beyond America’s borders, and there is little to nothing in Art’s world that will change the petroleum switch-over from somewhat financially-stressed small firms to the more stable super majors. This is cooked in.

It is indeed time to start noodling over what it means when the world’s largest supplier of internationally-available crude comes from a country that no longer has much interest in global stability.

That’s my new forest. The trees in this scary forest are not reserves and debt tables and drill bits, but Japanese missile ranges and Swiss insurance brokers and Saudi assassination manuals.

Time to meet some new specialists.

The Decivilization of VenezuelaAnalysis, South America

And Now For Something Completely Different…Analysis, UK