The world’s largest natural harbor, its location was an obvious choice for Britain’s maritime empire to set up shop in the early days of the continent’s colonization. Sydney Harbor (and the broader area of Port Jackson) continue to serve as vital port facilities for both the transport of goods—and tourist ships—that fuel Sydney’s economy. Ferries and a famous bridge serve as a crucial transportation hub for the broader Sydney metropolitan area.

The largest city in Australia, Sydney’s economy has switched from manufacturing to becoming a vital financial hub over the past century as well as a vibrant tourism destination as the city has grown to largely surround the harbor. Despite the distances involved, Australia’s cultural closeness to the Anglo world and the Aussie’s well-earned reputation for plunge-in brashness makes Sydney a favorite launching point for Brits and Americans eager to tap not just Australia’s ample resources or next-door New Zealand, but the more exotic of Southeast Asia as well.

For more on the future of Australia, see Chapter 9 in The Accidental Superpower, and Chapter 11 and 12 in The Absent Superpower. 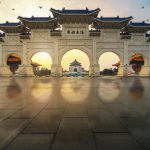 No. 100—KUALA LUMPUR, MALAYSIAKnow Your World