The importance of the capital city of Seoul to the Republic of Korea cannot be overstated. Approximately half of all South Koreans live in the broader Seoul metropolitan area, and the city accounts for nearly two-thirds of the country’s GDP. The city has seen a rapid, almost break-neck push toward development and industrialization in the 64 years since the end of major hostilities of the Korean War. Although Seoul still lives in the shadow of the bulk of North Korea’s missile and artillery arsenal, the city has been at the forefront of South Korea’s transformation following the introduction of democratic rule in the 1980s. Seoul is now one of the most technically advanced cities in the world, with the fastest average internet and the headquarters of Samsung and LG juxtaposed with medieval Korean architecture.

South Korea’s challenge is direct and massive. It is quite possibly the country that has benefited the most from the American’s institutionalization of the Bretton Woods accords, advancing from the fifth-poorest country in the world in 1953 to one of the richest today. While the Koreans are engineers and organizers par excellence, that advance — all of that advance — is predicated upon American military protection from North Korea, China and Japan, as well as unrestricted access to Middle Eastern petroleum and the American market. Without American sponsorship the South Koreans have a simple choice to make: attach themselves to some other country that has global naval reach, or retreat into self-imposed isolation. Put bluntly, it is a choice between subservience to their once-genocidal former-colonial masters, the Japanese, or once again becoming the Hermit Kingdom.

For more on the future of South Korea, see Chapter 10 in The Accidental Superpower, and Chapter 8 in The Absent Superpower. 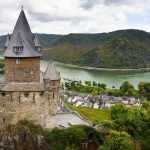 No. 96—THE GERMAN RHINEKnow Your World