As China’s financial, demographic and strategic problems mount, it is highly likely that Hong Kong’s future will reflect its past. That might be great for Hong Kong, but it spells trouble for China.

Southern China largely is tropical and mountainous, long making it nearly impossible for Beijing to exercise meaningful control. But the same mountains and tropics that impede central writ also complicate the formation of local political entities of meaningful size.

This leaves southern Chinese coastal enclaves, such as Hong Kong, widely exposed to the outside world. Such coastal cities often partner – sometimes reluctantly, sometimes enthusiastically – with foreign naval powers, making them more likely to be part of far-flung empires than a Greater China.

As cities like Hong Kong dream of wider horizons and the stability, security and wealth that come from them, Beijing will find itself facing challenges economic, financial, political and military in origin. There are solid reasons why the central government’s tone on denouncing “splittist” threats is so shrill.

For more on the (d)evolution of China, see Chapter 14 in The Accidental Superpower. 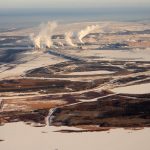 No. 10—OIL SANDSKnow Your World