Morro Castle perches at the entrance of Havana Harbor, one of the world’s (and certainly Cuba’s) best anchorages. What Morro does for Havana, Cuba itself does for the entire Gulf of Mexico, commanding the entrances to the Yucatan and Florida Straits.

The importance of this positioning has ebbed and flowed based on the global geopolitics. In the imperial age, keeping Cuba out of European hands was worth the Americans launching a war against Spain in 1898. During the Cold War, weakening the Cuban-Soviet alliance was worth risking a nuclear conflagration. In a post-Cold War free trade world in which the Americans face no serious global competitors, America’s Cuba policy is best summed up as a dismissive yawn.

Cuban geopolitics is about to come back into fashion. The world is evolving into a much more mercantile system in which the Florida and Yucatan Straits are in essence internal American waterways. In the not-too-distant future, Havana will have a decision to make: find a means of getting along with Washington, or have Washington force the issue. The nature of the American-Cuban relationship is about to change … one way or the other.

For more on the nature of the Cuban relationship and how the American alliance network will evolve, see Chapter 9 of The Accidental Superpower. 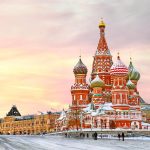 No. 60—RED SQUARE, MOSCOWKnow Your World No. 62—CALGARY, ALBERTAKnow Your World